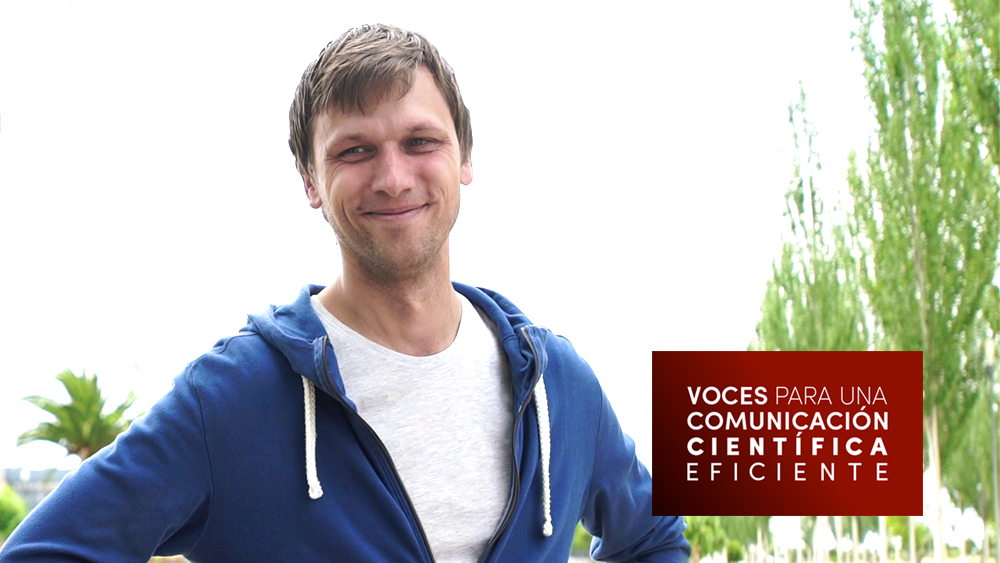 Head of Digital Media Lab at the Faculty of Communication, Vilnius University

Andrius Suminas is a head of Digital Media Lab at the Faculty of Communication, Vilnius University. He holds a PhD in Information and Communication Sciences. His main areas of research are political communication, web campaigning, interactive networking, journalism, media theories, business communication in social media, publishing communication. He can be contacted at: andrius.suminas@gmail.com

CONCEPTUALIZATION OF THE COMMUNICATION

Jose Luis Rubio-Tamayo: What do you think is the function of communication in research projects?

But I understand your question. You are focused mainly about external or public communication, so again, it’s extremely important that researchers nowadays will spread what we are doing in our labs, or in their projects, that the result that we create would reach the general audience. We can say that communication is starting to be more and more important. And again, in every grant that we can see such as important part of the communication of the research results.  It’s important not only to do research nowadays, but to spread research to reach the other scientific peers for your scientific result and so on. Every research has to have basic communication skills, how to communicate with what they are doing, to do some social communication in a way of and so on. 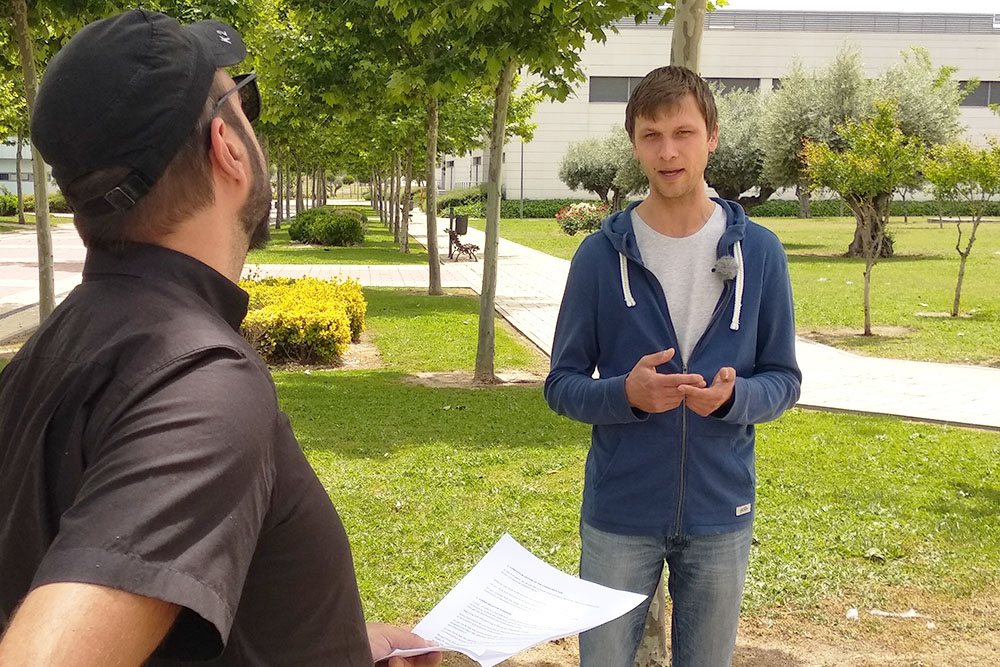 J.L.R.T.: Do you think that function is currently correctly fulfilled? Do you consider that the design of calls for competitive projects pays attention to the importance or necessity of communication?

We don’t have knowledge of how to do it in some cases. We don’t have time or, at least, they think that we don’t have time, because we are busy doing some more important things than just talk about the research to the public. And we have such a situation that people don’t know about the research results in general. And others think that probably skills that every researcher or every academic nowadays should have, are some particular communication skills. How to do communication? How to prepare a message? How to talk about difficult things, about difficult scientific things, in a very simple way which should be accessible for general audiences, for general people and so on? And again, it’s extremely important that this kind of soft communication skills would be part of every researcher in everyday activities. 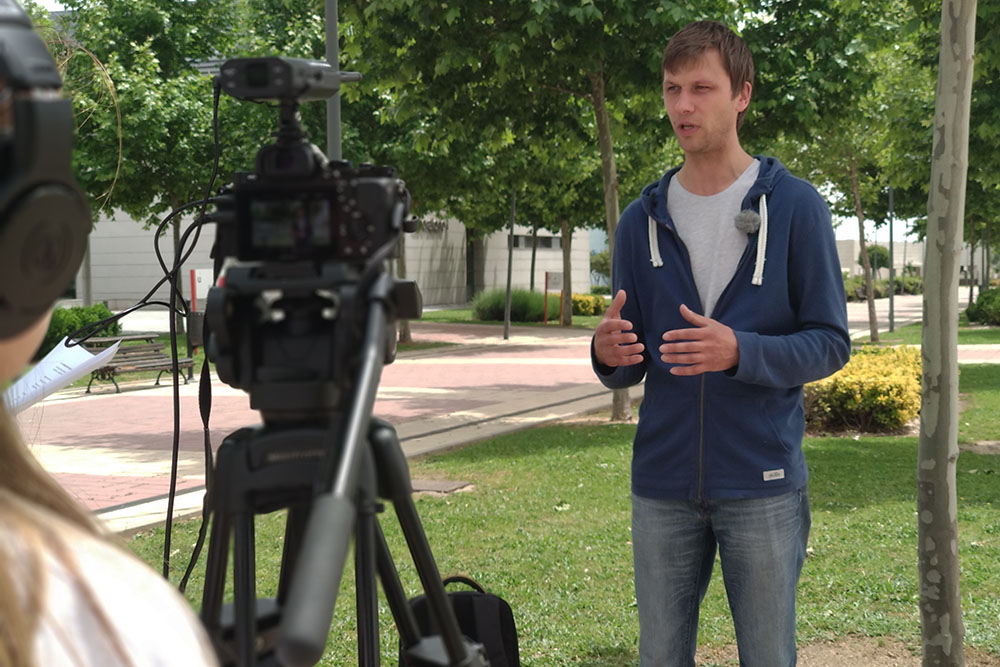 J.L.R.T.: What importance do you think has an adequate planning of communication, training, dissemination and scientific dissemination?

A.S.: You know, like every action, communication have to be planned as well it cannot just happened by accident like an storm. It’s extremely important to have clear ideas for whom you are going to communicate your messages, which channels you are going to choose, what kind of budget you are going to have, who’s going to be your responsible for such actions, and so on.

Because in many cases professional people should be who know how to do it, know how to use, how to prepare, how to create the content, how to choose the channel, how to spread the messages and so on. In many cases, it’s, as well, very important for people to be motivated enough and passionate enough to do it. Because if not, in some cases, I see that researchers are just doing it in a very informal way. Just, okay, you need scientific communication here, and you have it, but they are doing such in a boring way, in a not interesting way, and definitely, nobody it’s going to be cared about that content. So, it’s very important that people would be fair about the things that they are doing.

J.L.R.T.: Do you think that the communication plans that incorporate the project proposals are well designed and meet the objectives defined in the global framework of RRI?

A.S.: It’s hard to tell, because now we are talking about such a huge skill of the project’s applications and so on. It’s hard to generalize and to put everything on the clear shelf. I guess we can see very good examples and very bad examples. So, but all the knowledge that general exists it’s not good enough and it’s still the researcher who’s not really paying all the attention for those particular communication of the results of the projects. Results for general masses and even so, over all the lines of application in the projects, but the final outcome, in many cases, it’s not good enough. 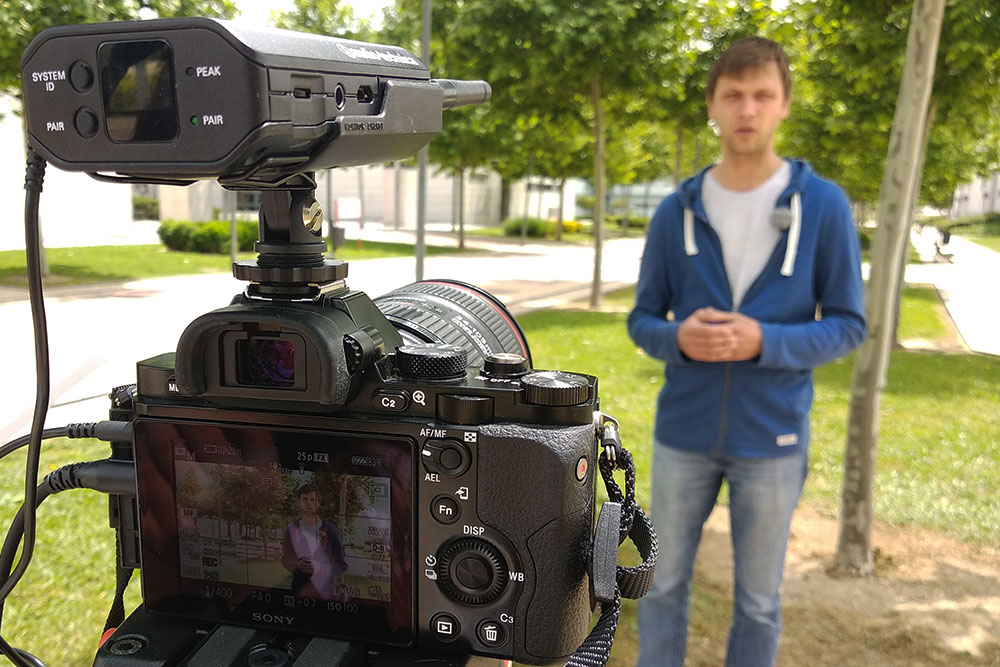 J.L.R.T.: Okay, in this case, do you think that this planning contemplates the different, dissemination, training and communication actions of the transfer?

A.S.: It’s not enough to have just this kind of formal need of communication. It should be the people who are motivated, to do the communication and I´m talking first about scientist themselves. But, and It’s an important part, I guess nowadays scientists should realize that they should start to build the kind of public-brand as a scientist, you know.

It should be kind of different approaches that nowadays scientists should really go outside from the labs, and start to be more like the public personas, more like social influencers on the way, and just like university, but really like on a society level.

J.L.R.T.: Do you think that this planning contemplates the different, dissemination, training and communication actions of the transfer?

A.S.: I guess, again, we are talking about social science and social sciences. They are a clear lack of different interest groups, and it’s hard to tell who is the responsible for it. We can see that business is not interested, because we do not see what profit is being involved in such processes. So, it’s very known a chicken and egg question: who is responsible and who should start for activities? Definitely, I would say that such an involvement from different interest groups, should be definitely bigger. And we should really think how to facilitate such an involvement on a bigger scale. 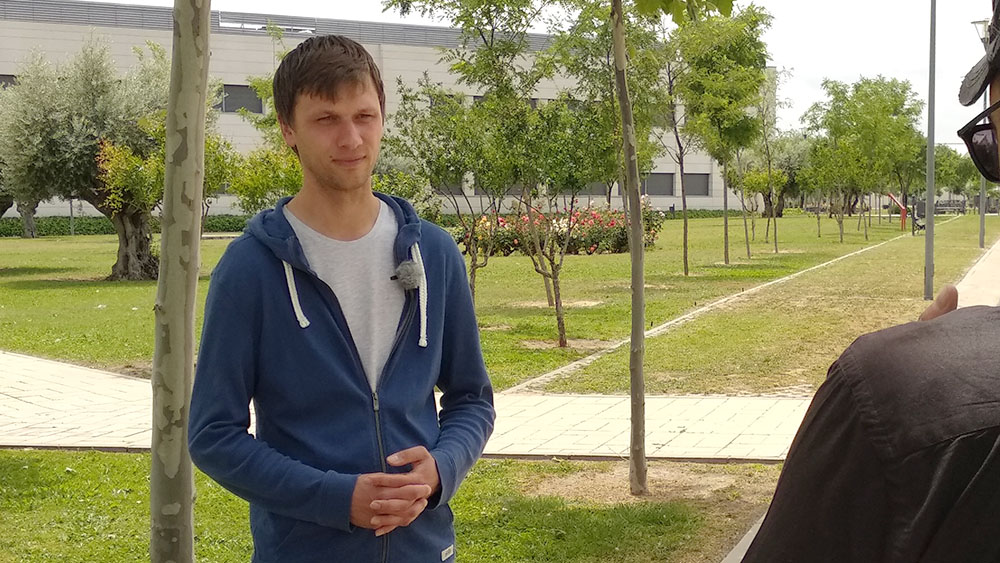 DEVELOPMENT AND DISSEMINATION OF THE ACTIONS

J.L.R.T.: Do you consider that the communication actions developed in the plans have an effective use of the resources and channels currently available?

A.S.: Well I would say that probably, it’s possible to use all different channels: traditional media channels, social media channels, social channels itself… And probably academia people, scholar, researchers… are not using any of those channels in a proper way. So, I guess, again, it’s a lack of knowledge, like people do not know how to reach traditional media, how to reach journalists, how to write press released, how create content for media. Traditional media, as well as people, do not know who to interact with in social media. You know, twitter is a very useful tool to get visibility in specific professional groups. I guess, the matter is the lack of knowledge. Academic researchers should get some kind of education, probably some kind of background of how to use all those things, and how to see clear benefits of using those social channels.

J.L.R.T.: What actions do you think are the best research projects? Which do you think could or should be improved?

A.S.: Well, everything could be improved, to be honest.  Nothing its good enough, even so the examples which I saw here at Universidad Rey Juan Carlos. It’s important to have professional people who know what they are doing, who could advise or even do the job instead of the researchers, like to create the content because still, for communication, you need good content and it’s hard to expect that regular researchers are going to prepare good content. So it should be good professional people, who really like getting the clear scientific results or scientific ideas and helping to create the content. Because, as we’ve seen on social media nowadays, content is the king. You need the good content, and, if you don’t have good content, you are not going to attract the attention. It’s very important to have those professional sites for researchers and some kind of cooperation between professional people and academic researchers. 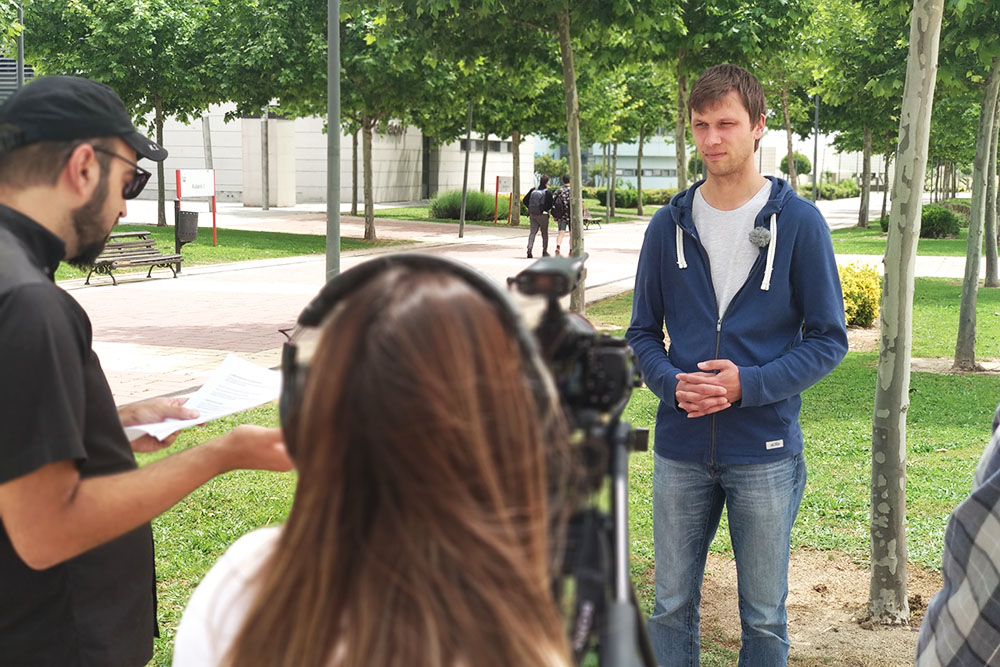 J.L.R.T.: How important is it, within the project, to measuring the effectiveness and efficiency of the different communication, dissemination and formative dissemination actions?

A.S.: I guess to summarize. It’s important that people from academia would get motivated to do the communication. I see, in many cases, problems in which there is an obligation to do some kind communication. So, people are doing it in a very formal way. It means that we need to know, to publish some kind of articles in online news portals. And they are doing it, but they really are not caring if it would be in a good news portal that would be known to be prepared in a right way, in an attractive way that would attract, you know, all the attention for general mass audiences and so on. So it’s kind of like formal way to do this obligation and know that media really needs good content. Traditional media need good content as well. If you give well prepared content to journalists, usually will be taken in a heartbeat. It’s not so difficult to attract the attention of even traditional media, as well, and just matter. But scholars would have the motivation to do. But you know, I want to show what they are doing, what are the results of our researchers, and so on. I probably see this kind of lack of motivation in many cases.

J.L.R.T.: Do you think that it is currently being done in the right way? If not, how do you think it should be done?

Probably. Again, I’m talking from a Lithuanian perspective. I already see, that universities started to pay attention to be visible on public discourse, like they started to do monitoring and started to do mentation and so on. They start to be some kind of push of administration, that scholars should be, as much as possible, on media.  But at this particular moment we don’t have any motivational systems, let’s say. But, if you are on media like ten times per month for something, you get some kind of reward. It can be such a model, but already, I see, at least, there is some kind of recognition at the university. At least, the deans are extremely happy if scholars are on media. And they can, at least, give a kind of public credit for such things. I would say we can see some such as, at least, shift to the right direction.

This website uses cookies to improve your experience while you navigate through the website. Out of these, the cookies that are categorized as necessary are stored on your browser as they are essential for the working of basic functionalities of the website. We also use third-party cookies that help us analyze and understand how you use this website. These cookies will be stored in your browser only with your consent. You also have the option to opt-out of these cookies. But opting out of some of these cookies may affect your browsing experience.
Necessary Siempre activado
Necessary cookies are absolutely essential for the website to function properly. This category only includes cookies that ensures basic functionalities and security features of the website. These cookies do not store any personal information.
Non-necessary
Any cookies that may not be particularly necessary for the website to function and is used specifically to collect user personal data via analytics, ads, other embedded contents are termed as non-necessary cookies. It is mandatory to procure user consent prior to running these cookies on your website.
GUARDAR Y ACEPTAR